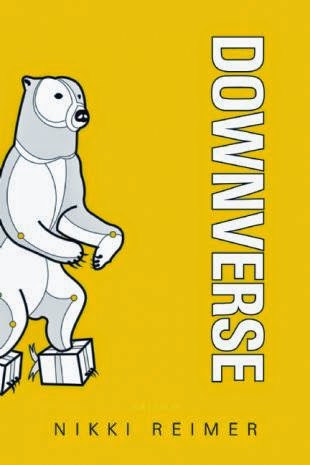 Downverse
Nikki Reimer. Talonbooks, $16.95 paperback (128p) ISBN 978-0-88922-854-2
In Downverse, Calgary poet Nikki Reimer’s second trade poetry collection, she explores the immediate cultural language of Vancouver housing, subjectivity, dysfunction, displacement and social media, including hashtags, YouTube videos and online commentary, as well as the very nature and purpose of writing itself. The quote that opens the collection, credited to an “inebriated audience member at a poetry reading” reads: “I hated your poem. / Your poem was so boring.” Further on in the collection, one of the quotes that opens the section “that stays news” reads:
“only a poet would say that the reason non poets don’t like poetry is because they don’t understand it. and therein lies the real problem. it’s not the poetry that is disliked. it is the poets who deliver it in such a way that they think they are somehow better, fairer, superior creatures than the rest of us that turns the stomach. you wrote some words that may or may not rhyme. you memorized them. you said them in front of people. they clapped. or didn’t. good for you. now go cure cancer.”
The author of a small handful of works, including her first trade collection, [sic] (Calgary AB: Frontenac House, 2010), and two chapbooks—fist things first (Windsor ON: Wrinkle Press, 2009) and that stays news (Vancouver BC: Nomados Literary Publishers, 2011)—Reimer’s work has long been engaged with the social concerns of a number of other West Coast language poets connected (in even the most tangential ways) to the Kootenay School of Writing in Vancouver (a city she recently returned to Calgary from)—such as Stephen Collis, Kim Minkus, Dorothy Trujillo Lusk, Jeff Derksen, Soma Feldmar, Cecily Nicholson and Peter Culley—and yet, the poems in Downverse display a distrust of those same systems of language, and how they retain and even create a distance between the author and reader. The poems in Downverseare centered in rage, boredom, grief, confusion and despair. Reimer displays a mistrust in the poem, while concurrently stretching the scope of what just might be possible. As the poem “television vs. the real” opens:
we watched Dr. Phil who told us to get a job!
& take responsibility for our marriages!
& create equal partnerships on an emotional, physical
& financial level!
the ultimate truth! … a phallus, I confess
we watched Tyra who told us to forget about money
& stop selling our souls to our jobs
Dionysus cannot ensure you
an accomplished sexual relationship
we watched Oprah who challenged the truthiness
of the memoir
what lengths men go to make Woman exist
(June 2014)
Purchase Downverse HERE.
Reviewer bio: Born in Ottawa, Canada’s glorious capital city, rob mclennan currently lives in Ottawa. The author of nearly thirty trade books of poetry, fiction and non-fiction, he won the John Newlove Poetry Award in 2010, and was longlisted for the CBC Poetry Prize in 2012. His most recent titles include notes and dispatches: essays (Insomniac press, 2014) and The Uncertainty Principle: stories, (Chaudiere Books, 2014). He regularly posts reviews, essays, interviews and other notices at robmclennan.blogspot.com
Share this article :
Share on FB Tweet Share on G+ Submit to Digg
Newer Post Older Post Home